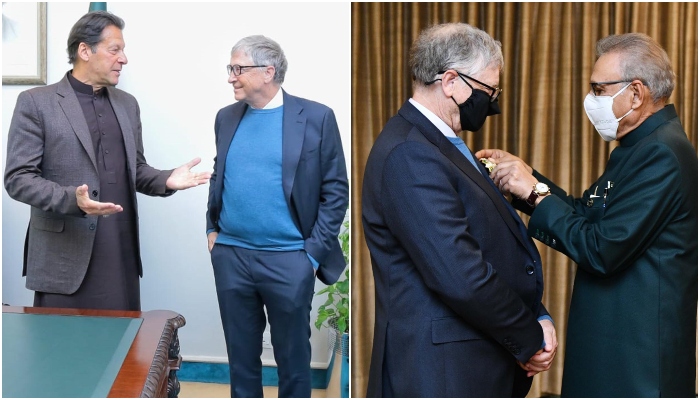 Co-chair of the Bill and Melinda Gates Foundation, Mr William Henry Gates III (Bill Gates) called on President Dr Arif Alvi, at Aiwan-e-Sadr, today. The President deeply appreciated the assistance provided by the Bill and Melinda Gates Foundation for eradicating polio. “Pakistan has not reported a single case of Wild poliovirus for one full year and things look promising but we would not lower our guard”, the President said. He added that the Polio campaign experience was of tremendous help during Covid-19 in which Pakistan performed exceptionally well. While congratulating Mr Gates on receiving the award of Hilal-e-Pakistan, the President said that the award was in recognition of his philanthropic services towards the cause of humanity. The President stated that Pakistan is trying to improve its nutrition needs of mother and child and that Ehsaas has a very good program in this regard. Mr gates said that research being undertaken by Bill & Melinda Gates Foundation on gastric microbiome could help overcome some challenges in this regard. Talking to Mr Gates, President Dr Arif Alvi said that Pakistan was looking forward to outstanding cooperation with Microsoft in the IT sector. He said that Pakistan had huge youth bulge that could enormously help to meet the requirements of the Fourth Industrial Revolution. Both being avid readers, they also exchanged views on recent books on increasing wealth disparity in the world and the President emphasized that Mr Gates’ philanthropic work has led the way for rich people to work with social causes and reduce this inequality.

Typically replies within an hour

I will be back soon

Hey there 👋
It’s your friend Dany Williams. How can I help you?
Start Chat with: